I just wanted to let you know that your site is helping me learn a lot more than the AA have done. I'm using it on a Windows Surface tablet. Thank you.

This website helped me so much with my hazard perception. I passed mine first time. Thanks.

Road signs are a key indicator of rules of the road, road conditions, what is nearby and potential hazards you may encounter. They give you important information to keep you safe on the road, so it’s imperative that you learn what they mean and what you need to do when you see them.

In this section, you’ll find out about what you can learn from:

Road signs and what they tell us

When you’re driving along it can be overwhelming to take in everything going on around you. One of the first things to keep an eye on is the shape of a road sign as this can give you clues about its meaning.

Orders are given on circular road signs: 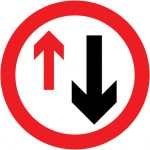 If a circle is on a blue background, then it is giving you an instruction or showing you which sort of road user can use a route. For example if it’s a route that’s open to cyclists, pedestrians or trams: 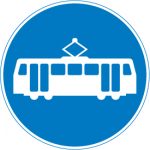 Things you must not do are shown by a red ring or circle: 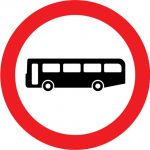 They are also used to demonstrate maximum speed limits. Although it may seem like it’s giving you information and should be on a rectangular sign, it is red as you must not go faster than the speed shown. 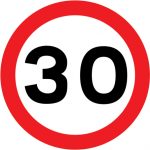 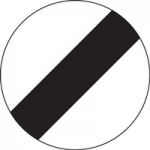 Speed-limit signs may be combined with other road signs, such as those indicating a traffic-calmed area, so keep alert at all times to say safe and make sure you’re not breaking the law. 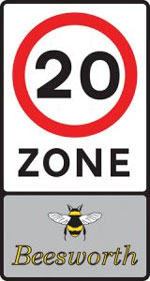 Warnings are given on triangular road signs:

Information is given on rectangular road signs:

If a sign has a brown background then it is giving tourist information:

There is one key exception to the shape rule and that is the ‘stop’ sign. This needs to stand out and be understood even if it’s partly covered, e.g. by snow. For that reason it is octagonal, unlike any other sign: 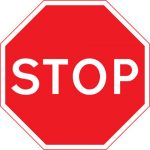 This is just a small sample of the various road signs you may see in the UK. To find out more you should consult Know Your Traffic Signs as this shows all the signs you’re likely to see and The Official Highway Code contains important advice and information on current laws in Great Britain.

Road markings are another way that you can be given information, orders or warnings, in addition to road signs. White paint is used to indicate lane divisions. The amount of paint on the road is generally indicative of the level of hazard ahead.

Road markings can be found in three areas of the road:

Middle of the road

You may find short broken white lines down the middle of the road, this marks the centre of the road:

A hazard ahead is shown by a longer broken white lines shown, meaning that you should only overtake if the road ahead is clear:

You may see white diagonal stripes or chevrons. These are there to separate lanes of traffic or protect traffic that wishes to turn right.

The area that separates traffic flowing in opposite directions is occasionally highlighted by red tarmac being used within a block of white lines or diagonals.

If you see double white lines with a solid white line on your side of the road it means that you must not straddle them unless you’re turning into a junction or an entrance; you need to pass a stationary vehicle; or you need to overtake a cyclist, horse or road maintenance vehicle moving at 10 mph or less.

Side of the road

The edge of the carriageway will be indicated by a white line:

Waiting and stopping restrictions will be shown by single or double yellow lines:

Zigzag lines (white at pedestrian crossings, yellow outside schools) also show stopping restrictions and indicate that there is no stopping or parking at any time:

On or across the road

‘Give Way’ is shown by broken lines across the road. If these are at a roundabout then you should give way to traffic from the right:

‘Stop’ is shown by a single solid line:

There are various ways that markings on the road can warn you of hazards and they are not all via paint, for example, road-hump markings:

Just like road signs, there are many more road markings that should be covered in preparation for your driving theory test. Please refer to Know Your Traffic Signs and The Official Highway Code to learn more about road markings.

Road lanes such as bus and cycle lanes are marked out on the road and there will be accompanying road signs telling you if or when you’re able to enter them. You may also come across contraflow lanes, which flow in the opposite direction to most of the traffic. 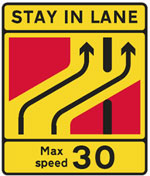 Contraflow lanes for cars are usually found on the motorway or at roadworks. The centre and right-hand lanes of a three-lane motorway are overtaking lanes you should keep to this rule and always move back to a lane on your left after overtaking, to allow other vehicles to overtake. On a free-flowing motorway or dual carriageway, you mustn’t overtake other vehicles on their left.

When you see the road signs indicating that a contraflow lane is in affect you should:

This applies to cars travelling on the roads but bus and cycle contraflow lanes may be found in one-way streets. They will be signed and marked on the road in the same way as usual bus and cycle lane. You should never try to drive against the flow of traffic in these lanes.

Traffic lights are signalling devices positioned at road intersections, pedestrian crossings, and other locations to control flows of traffic. They work in a sequence and different colours instruct you to do different thing. The traffic light sequence is as follows: 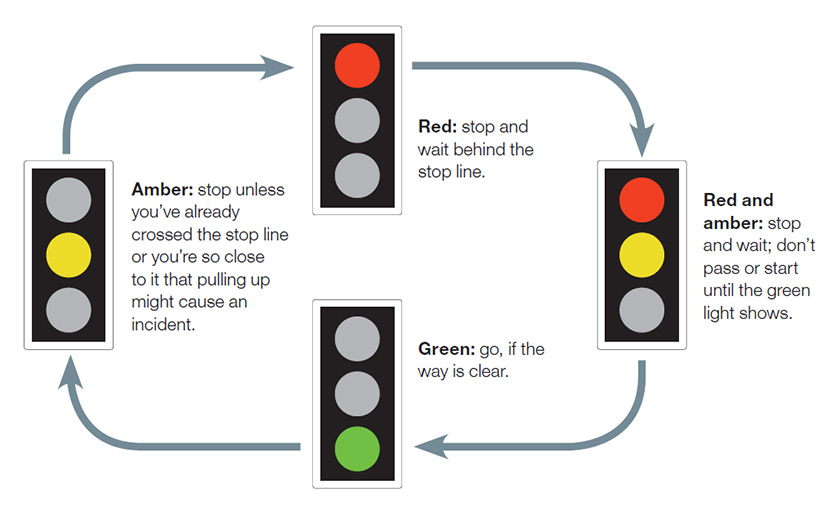 Some traffic lights have a green filter arrow. This means you can go only in the direction of the arrow. This applies even in the case that the main light isn’t showing green.

If they’re not working

If a set of traffic lights is out of order then nobody has priority. This means that you should travel very carefully and be ultra-vigilant. There may or may not be a sign telling you that the lights aren’t working, so you need to use your judgement and watch the flow of traffic.

At roadworks you may have a temporary set of traffic lights or else traffic can be controlled by a police officer or a ‘stop/go’ board. Police or traffic officers may signal to you if they’re directing traffic. You MUST obey any signals given by police or traffic officers, traffic wardens and signs used by school crossing patrols, otherwise known as lollypop ladies.

You should ensure that you know all the official arm signals in case you need to use or react to them, again these can be found in The Official Highway Code.

At some locations, such as level crossings, lifting bridges or outside fire stations, you may see red flashing lights being used, you MUST stop when these show.

On motorways, signals on the overhead gantries or at the roadside may serve to give you directions or warnings. These may also have flashing lights.

Different colours warn you of different things, amber signs warn you of a hazard ahead such as a lane closure, fog. They may give instructions such as telling you to leave at the next exit, or give you information and warnings, for example, telling you if a temporary maximum speed limit is advised for the conditions.

Signals are not just stationary markers on the road, they are also given by other road users.

Indicating is the most common signal you will see and use to tell other drivers that you wish to turn. To avoid confusing other road users you should ensure that your indicators are cancelled after you’ve turned and be aware that another driver may have left their indicator on by mistake. 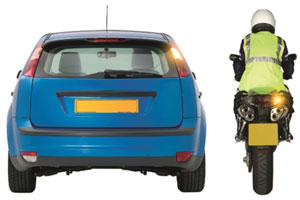 If you’re slowing down and stopping just after a junction, you should wait to signal until you’re passing the junction, or just after it. Keeping good distance from other vehicles will help keep you safe in the event that you need to react quickly. A good example of this would be to imagine that you were emerging from a junction and another driver was coming along the main road from the right. If they are close to you and indicating left, you should wait until the vehicle starts to turn before you emerge. They may misjudge the gap and emerging too soon could cause an accident. Be calm and patient.

Sometimes indicators may not give you sufficient scope to let other road users know what you’re doing such as if you’re signalling to turn right in busy traffic or slowing down to give way at a zebra crossing. In this case you should strengthen your indication signal by using arm signals too.

Like your horn, headlights are to only be used to alert other road users of your presence.

You can use your hazard warning lights briefly to warn drivers behind you that there’s an obstruction ahead if you’re driving on a motorway or unrestricted dual carriageway. 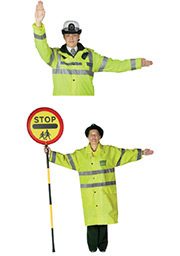 Police or traffic officers have different rules to follow and if they’re following you in a patrol vehicle, they are allowed to flash their headlights in order to give you instructions. If they flash their headlights at you, indicate left and point to the left then they are directing you to stop. You should pull up on the left as soon as it’s safe to do so.